In 3 days time the people of Scotland will be voting in a referendum on whether Scotland should be an independent country. A year ago most people and the polls said the YES side (those wanting full independence) had not a hope, but a week ago the YES group went ahead in the polls for the first time. Now it seems as if it is going to be a very close call, on friday morning we will know what is Scotland’s destiny..

Im hoping Scotland will vote YES and with that, break away from the Union of the United Kingdom of Great Britain and Ireland. This democratically elected act would act as a catalyst to further political change in the “British Isles”… Perhaps soon we might see the statelet of “Northern Ireland” also leaving the UK and joining its southern chunk of landmass, the “Republic of Ireland” to form a United Ireland. Also, If Scotland votes yes, it prompts very interesting questions for Spain, will it lead to Catalunya and the Basque country leaving the Spanish union? To Britains democratic credit, at least they are allowing the Scots to make up their own minds on the matter, back in Spain there is no such openess with Madrid still forbiding the Catalans to carry out a similar referendum on the 9th of November. Interesting times in Europe.

A week ago (Saturday 6th September) the YES side edged ahead in the polls for the first time, following its continued rise… in the excellent documentary “Scotland Yet: a film about independence” one can see why this is the case… On the YES side an amazing culture is growing, including art, dialogue, dreaming and vision… it has opened up a collective dialogue about what sort of country the people really wish to live in. It seems to have been a spark, far more than what has been portrayed by the other side… It seems more people are swinging to YES, they have hope and have dropped fear, they are PARTICIPATING in the collective process… This is what democracy should be about, an open invitation for all to share in the processs of making the world they wish to live in… Great to see.

More and more of the radical / progressive groups from England, Ireland, Wales and further afield are also supporting YES, in the hope that if and when it happens, that the spirit of HOPE bursts beyond Scotland, that the passion takes hold in more communities, where normal people start to take control of their own lives and destiny… That they start to engage in the creative process of making spaces and systems that allows their dreams to shape the reality..

This is a very special time, perhaps even the end of a very dark chapter in British and European history, that of moving from the politics of fear and apathy to one of passion, creativity and hope…. 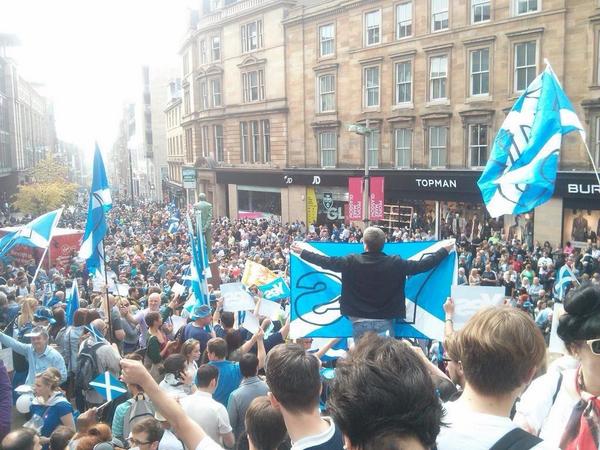 END_OF_DOCUMENT_TOKEN_TO_BE_REPLACED

RIP Rik Mayall, a mad creative genius who changed the face of comedy.

I was a huge fan of “Richie Rich” and the other madsers in Filthy Rich & Catflap, years ago, that was my first introduction, then some of The Comic Strip presents, then bottom and also The Young ones.

Below are a few videos, examples of his madness and creativity:

END_OF_DOCUMENT_TOKEN_TO_BE_REPLACED

(Originally posted on Indymedia Ireland on Friday May 30, 2008)

As a species we are finally waking up to the Climatic crisis that we have stupidly gotten ourselves into. After many years of not listening, people now realise the problem we face: ADAPT OR DIE. Some see the human species as a cancer that should die off, a natural end for a silly species. But others have a vision of a sustainable world, a vision that drives them to think differently, act differently, design differently, live differently. For many its simple little lifestyle changes, for others its nothing short of the next chapter in this unfolding strange story of civilization: the ecological revolution.

Cities as forests : infrastructure and participation (click to enlarge)

END_OF_DOCUMENT_TOKEN_TO_BE_REPLACED

Saying NO to fascism in football

New Sunderland manager Paulo Di Canio: “I am a fascist, not a racist.”

In 2005 he told the Italian news agency Ansa: “I am a fascist, not a racist.” He has been pictured giving a straight-arm salute in front of fans of the Rome club Lazio, which has a strong following among the far right. Many are outraged at this signing and think it is a worrying situation which futher ligitimizes the creep of fascist thinking into everyday life.

Di Canio: Fascist is as fascist does

END_OF_DOCUMENT_TOKEN_TO_BE_REPLACED

British State Collusion… Pat Finucane wasn’t the only one!

Yesterday David Cameron admitted that there was ‘shocking levels of (British state) collusion’ in the Pat Finucane murder, but how much more collusion has there been that still has to be uncovered?

END_OF_DOCUMENT_TOKEN_TO_BE_REPLACED

‘The conclusions of this report (The Saville Report) are absolutely clear. There is no doubt, there is nothing equivocal, there are no ambiguities. What happened on Bloody Sunday was both unjustified and unjustifiable. It was wrong. On behalf of our country I am deeply sorry”

On the 30th of January 1972 in Derry, Ireland 26 civil rights demonstrators and bystanders were shot by the British Army Parachute Regiment without warning or provocation. 13 died on the spot and another was mortally wounded. All were unarmed and most were teenagers. No one has ever been brought to justice.

Bloody Sunday: A dramatization of the Irish civil rights protest march and subsequent massacre by British troops on January 30, 1972.

(This article was first published on Indymedia Ireland)